A Morning with a Kingfisher

Recently, I was lucky enough to find a pond on which a male belted kingfisher had set up his winter foraging territory here in central Florida.  As those of you who have ever tried to photograph belted kingfisher know all too well, this species is very hard to get close to.  Thus, getting good detailed images of them going about their daily activities can be very difficult.

To get close to this particular bird I set up a blind and on the mornings I photographed entered the blind well before the first light started to show in the east.  I did this, because on many mornings the kingfisher would show up when it was still very dark. So getting in the blind early was a must.

Over the past month or so I have been able to get some really nice images of this kingfisher, which I will share in the following post.  However, I have received far more than just nice images from my time spent with this bird.  I have gained a great appreciation for this bird and how it goes about surviving each day.  I hope you will join me on the following pictorial exploration of a bit of this bird's daily life. 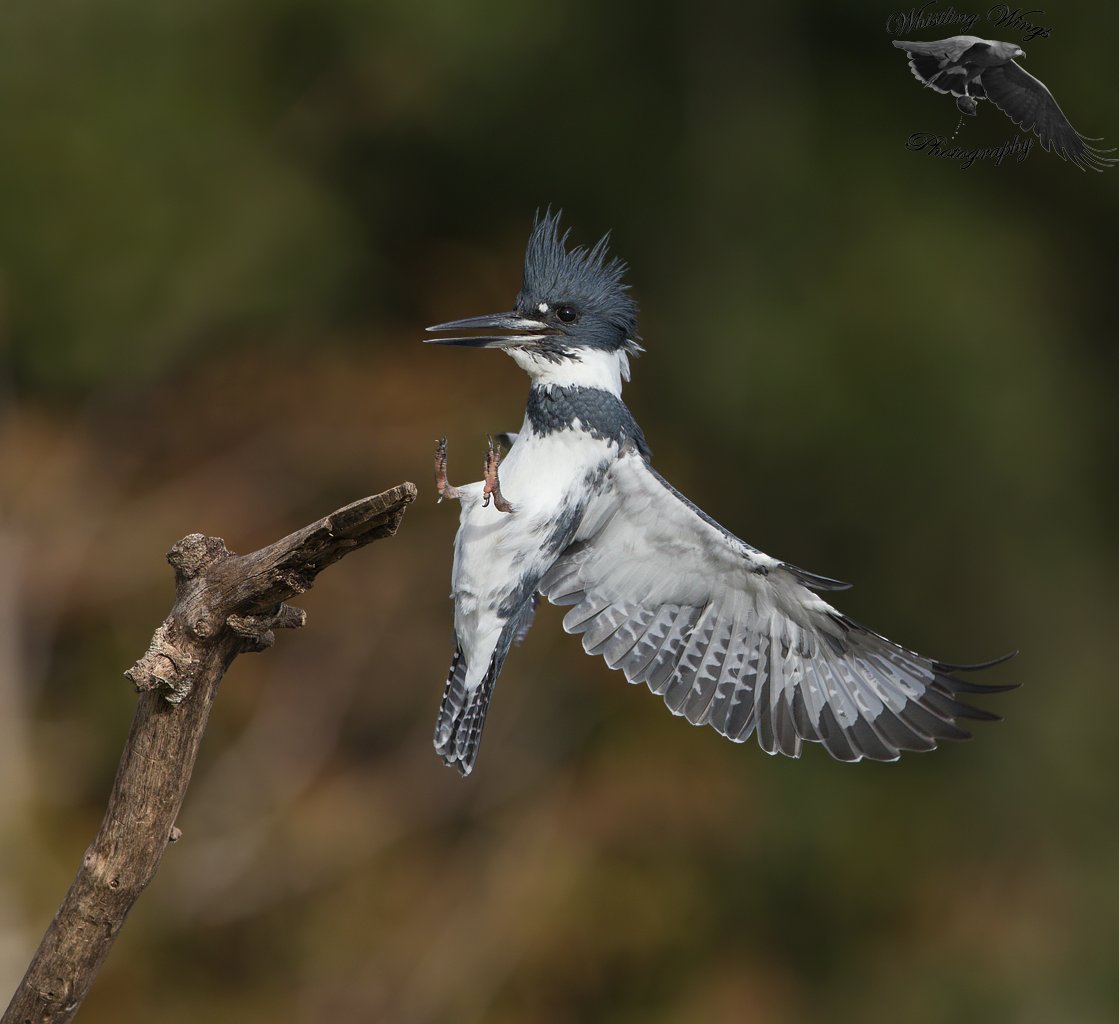 Each morning he would arrive early to a low perch over the pond.  It seemed apparent that this perch was this bird's first stop each morning. 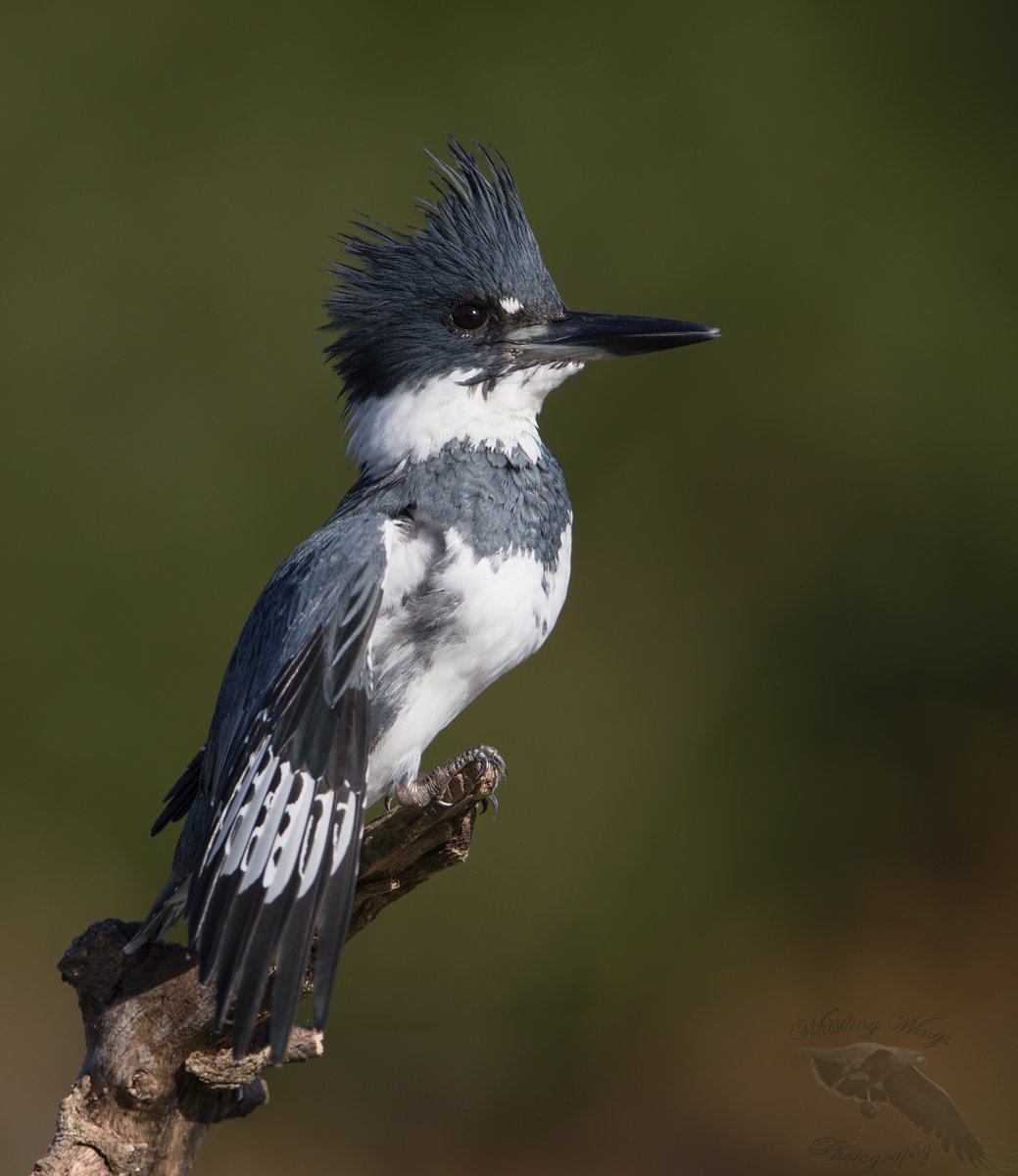 After arriving on the perch he would often assume a posture with wingtips held low.  It appears this was his "fishing" posture.  If he held his wings low, he was activily looking to dive and catch a meal. 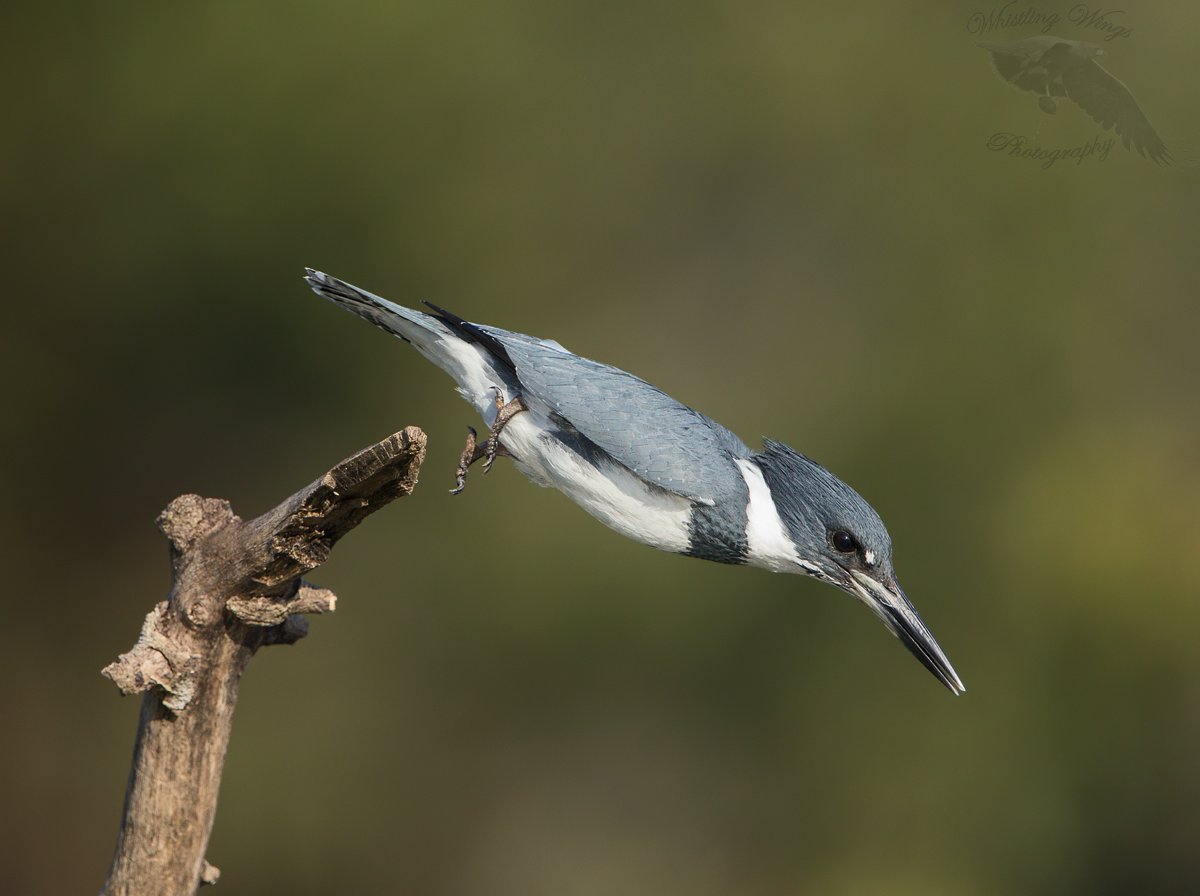 After watching the water for a bit he would often dive off the perch.  In doing so he often made himself as aerodynamic as possible. 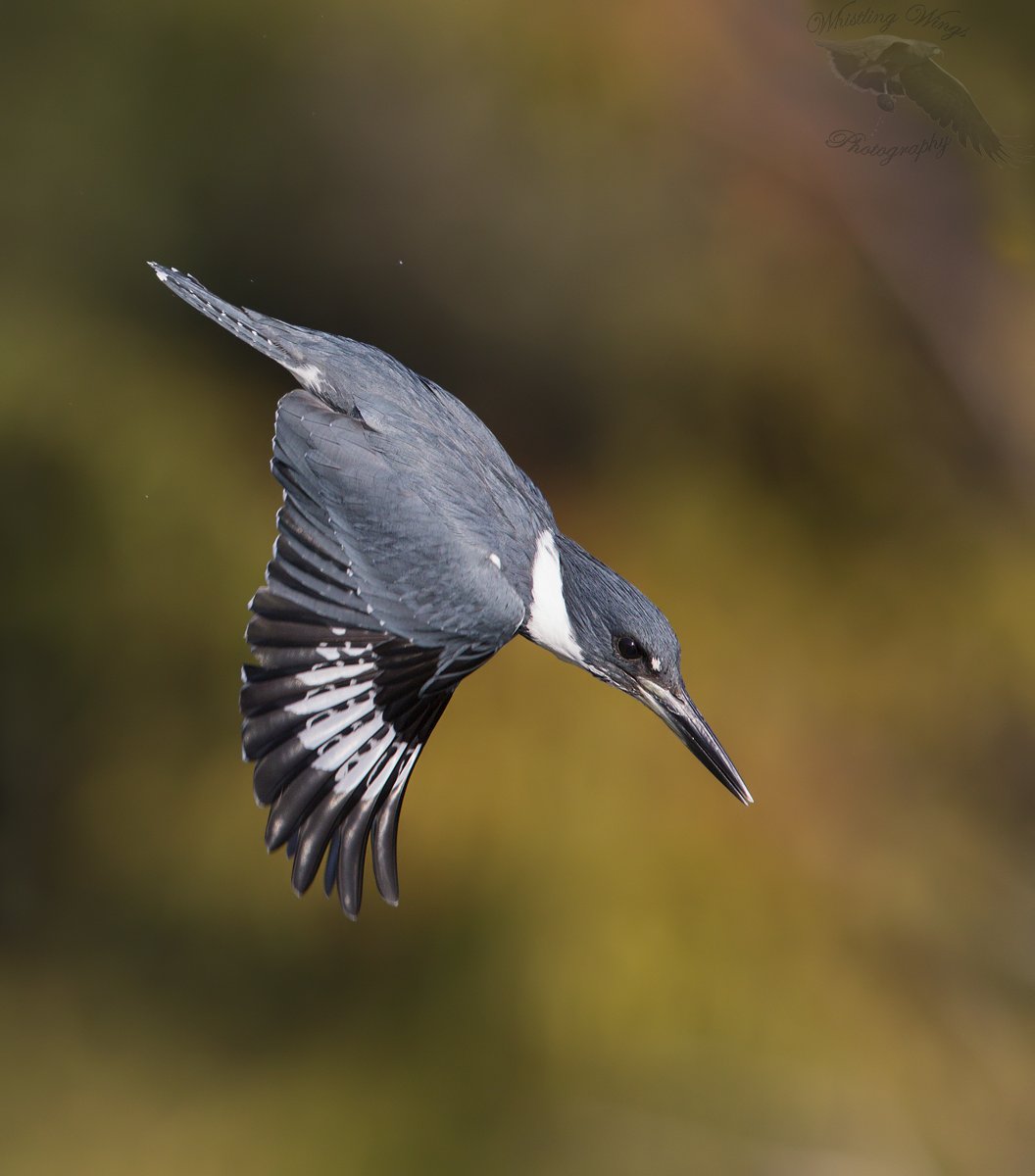 Given this was a low perch, he also would increase his speed with a few wing flaps. 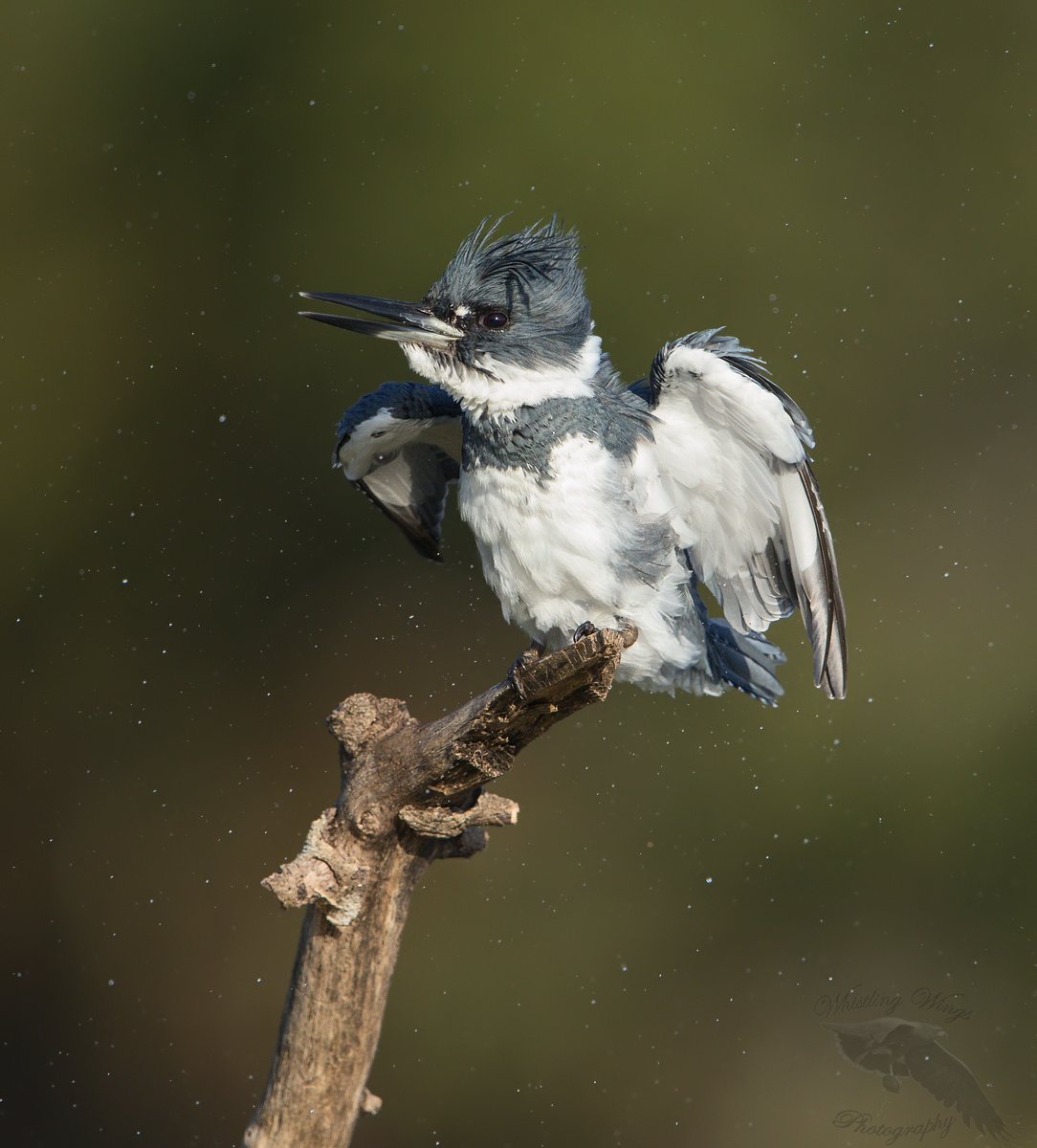 Sometimes he would miss his target and return to his fishing perch with nothing to show for his effort.  An unsuccessful return was often followed by a vigorous shake to help dry off before another attempt. 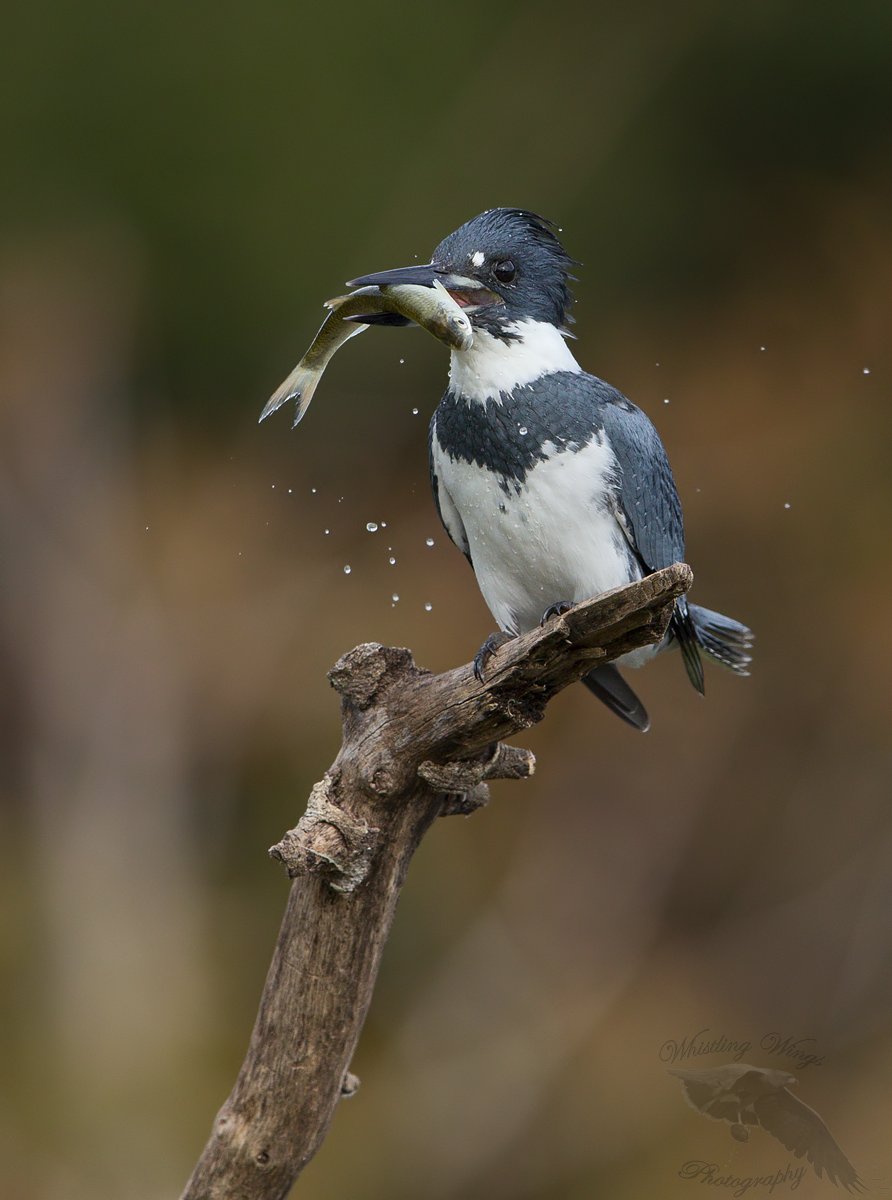 More often than not, he would be successful and return to his favorite perch with a fish of some kind.  Here it appears he has caught a native shinner. 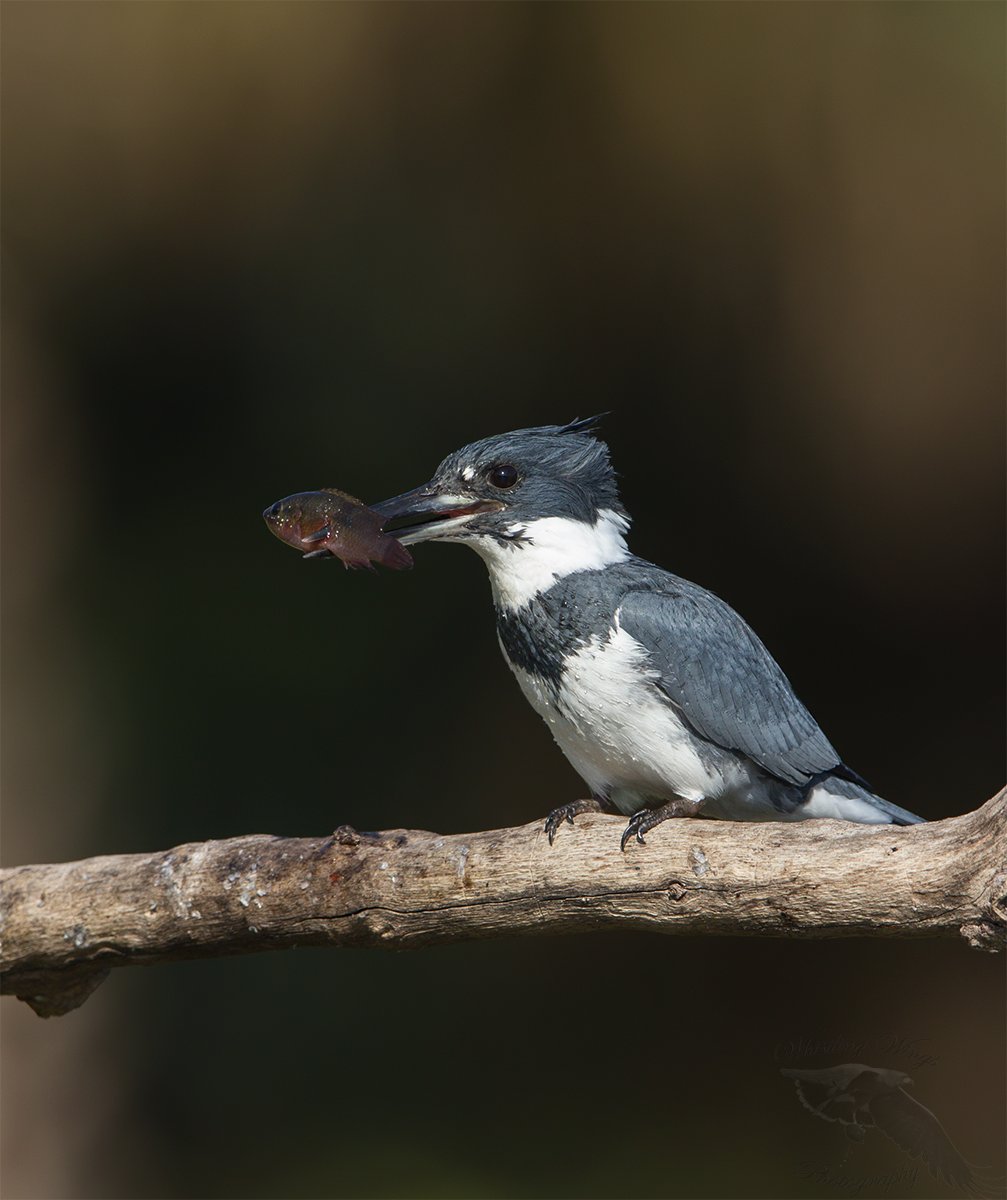 I observed him catch many different species of fish from this perch.  It appears this attempt netted him a jewel cichlid.  A non-native species.  It is good to see he is helping clean out the exotics from our local waters. 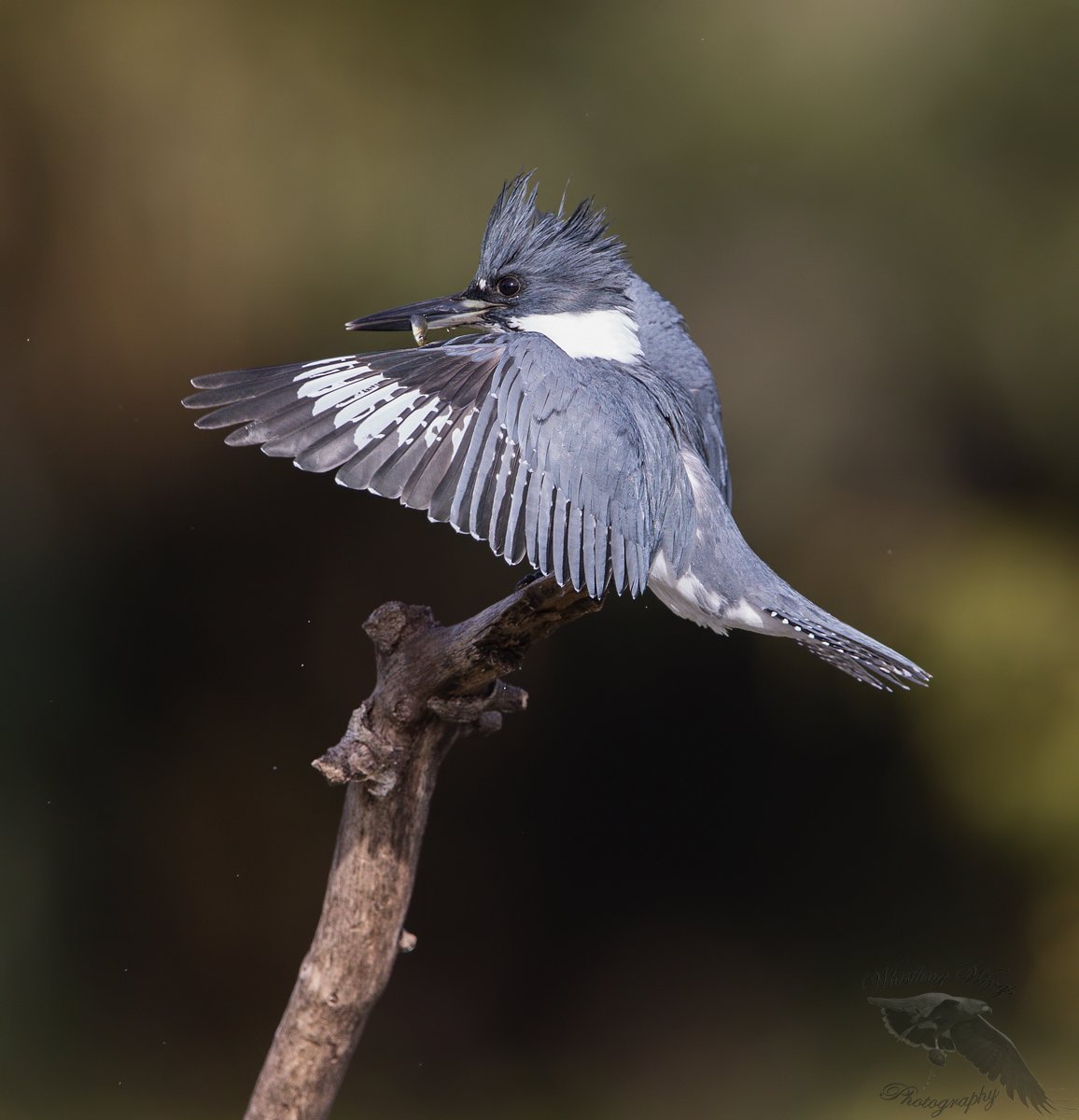 From this dive he returned with a small minnow.  Sorry, I can't tell you the species of that one. 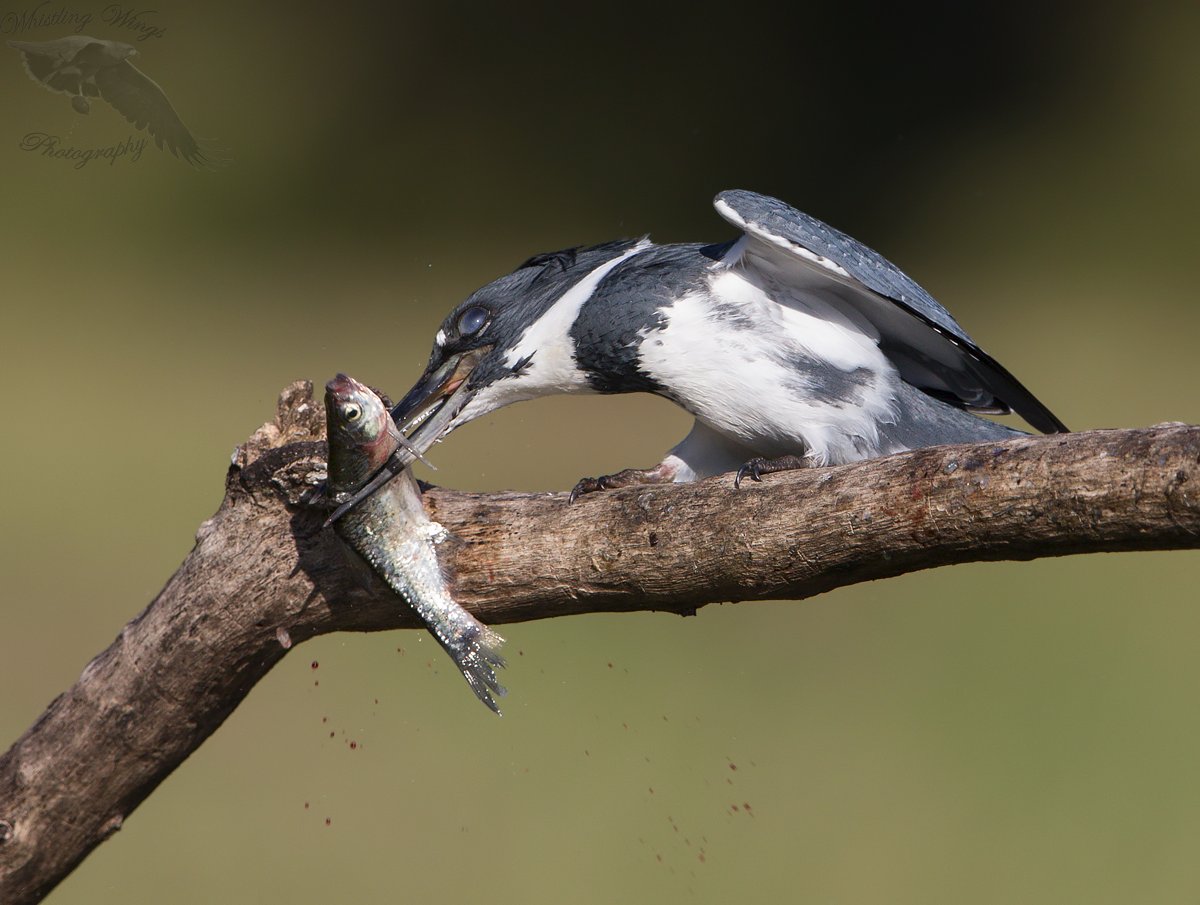 When he caught a large fish, he almost always would land on the horizontal portion of the perch, so he could basically bash the fish to death before consuming it.  Sometimes he would continue this activity for 5-10 minutes. 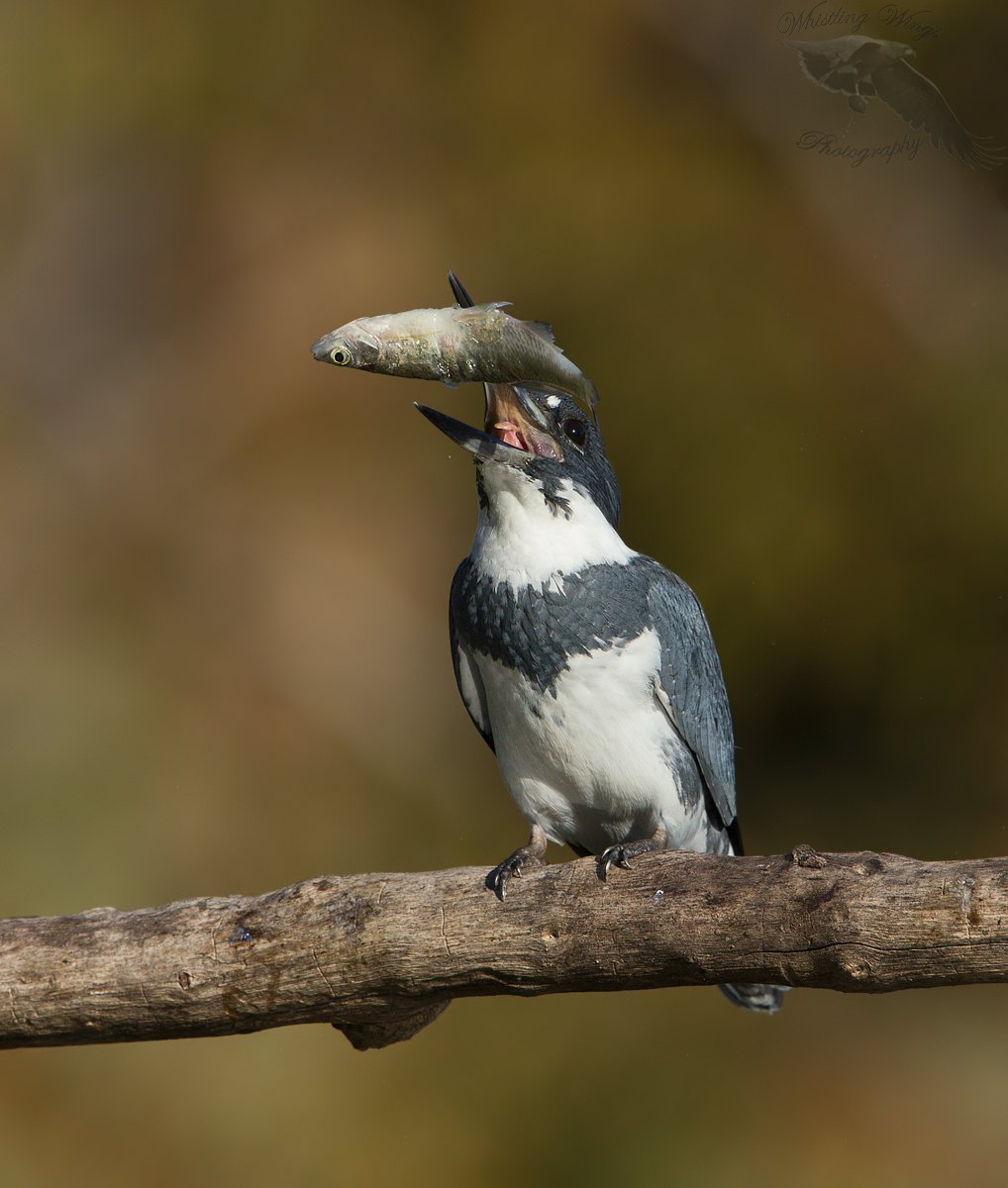 Once the fish was dead and well "tenderized" from the bashing, he would start flipping it in the air in order to turn it head first for swallowing. 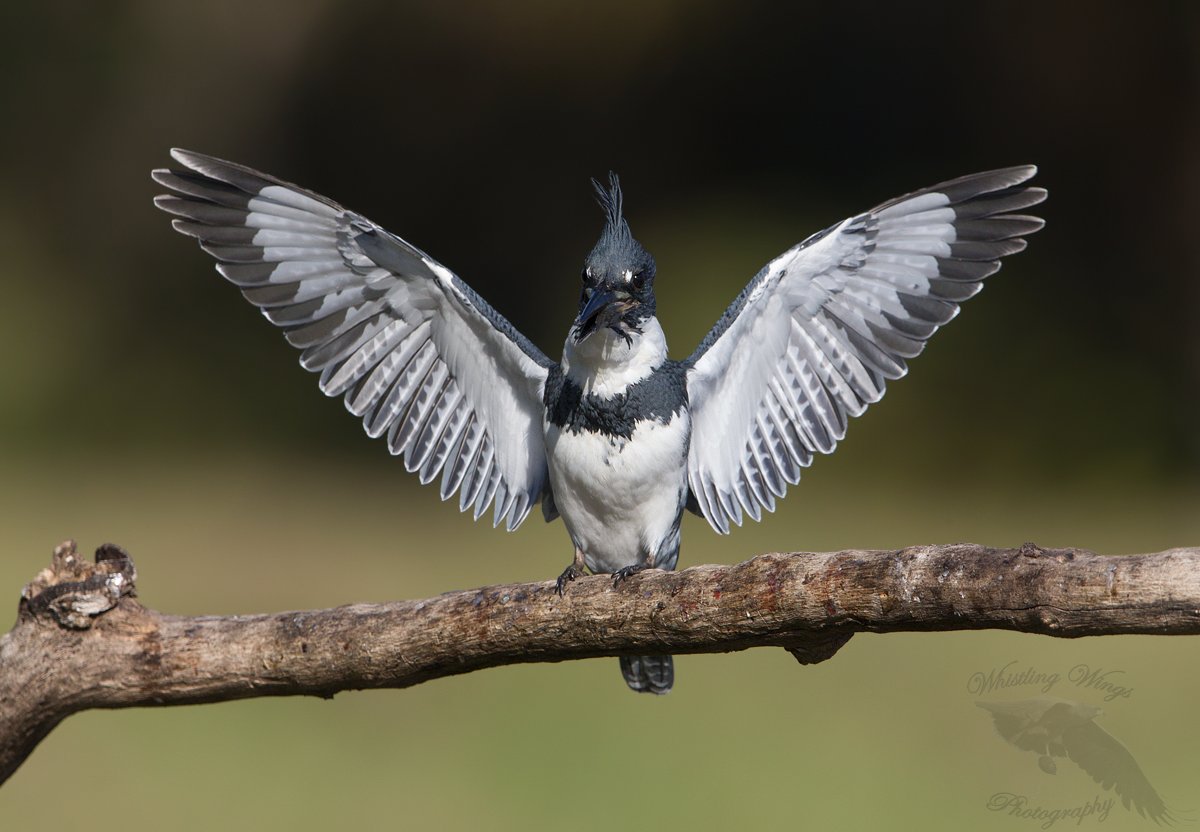 Often as he swallowed a fish he would raise his wings.  Maybe because he was signaling victory for his successful catch.  Then again maybe it just helped him swallow the big meal.

Most mornings he would eat 3-4 fish and then seemed satiated. 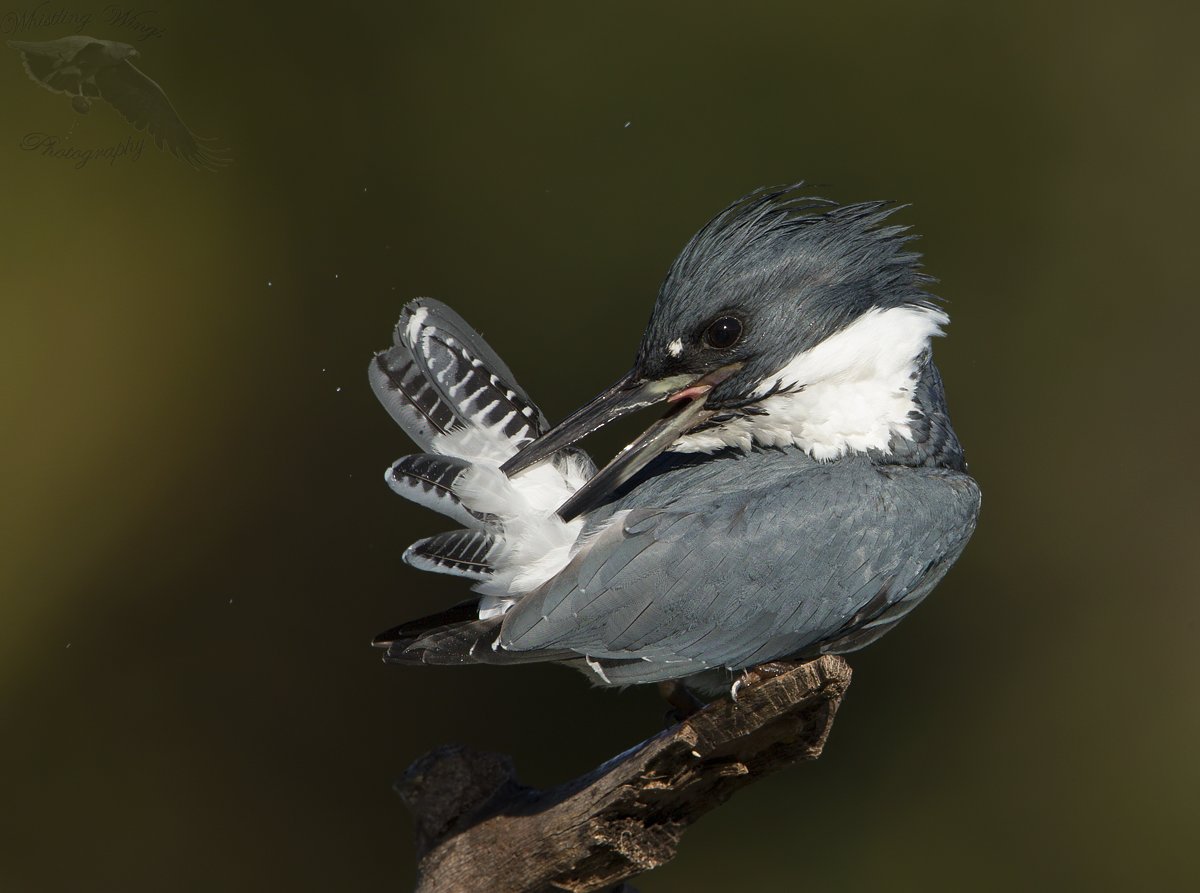 Once he had enjoyed his breakfast, he often would preen.  Appropriate given a  bird is nothing, well, except dead, without a well-maintained, functional plumage.  This bird kept his feathers in tip-top shape. 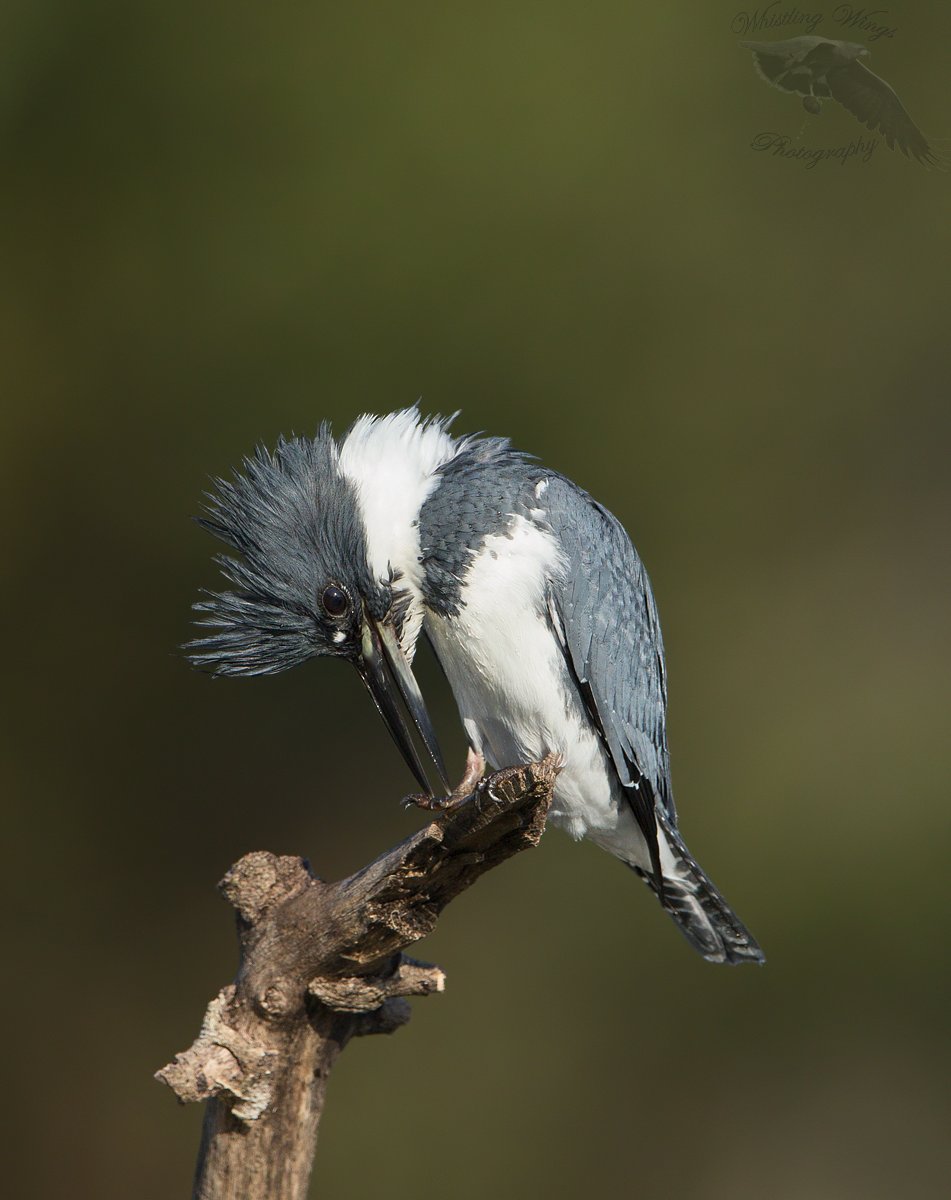 He even made sure his feet were clean. 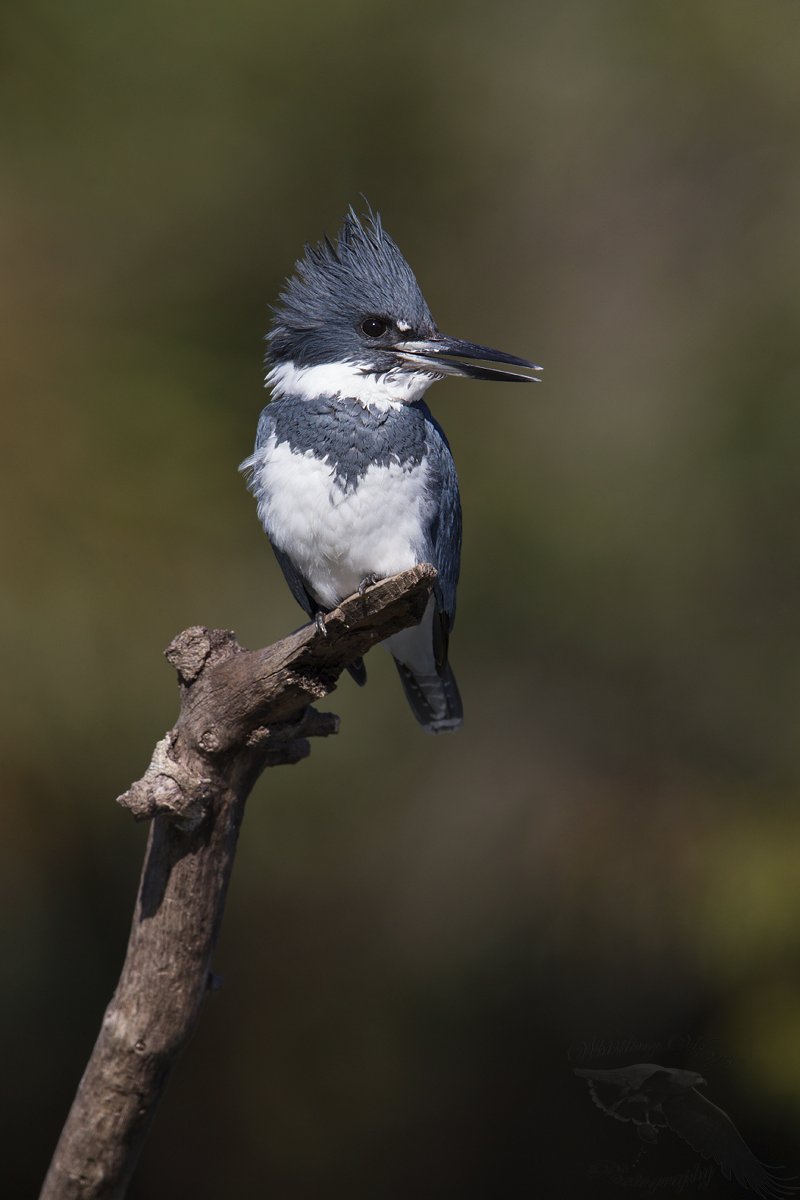 He also spent a lot of time just perched, resting, observing the world around him. 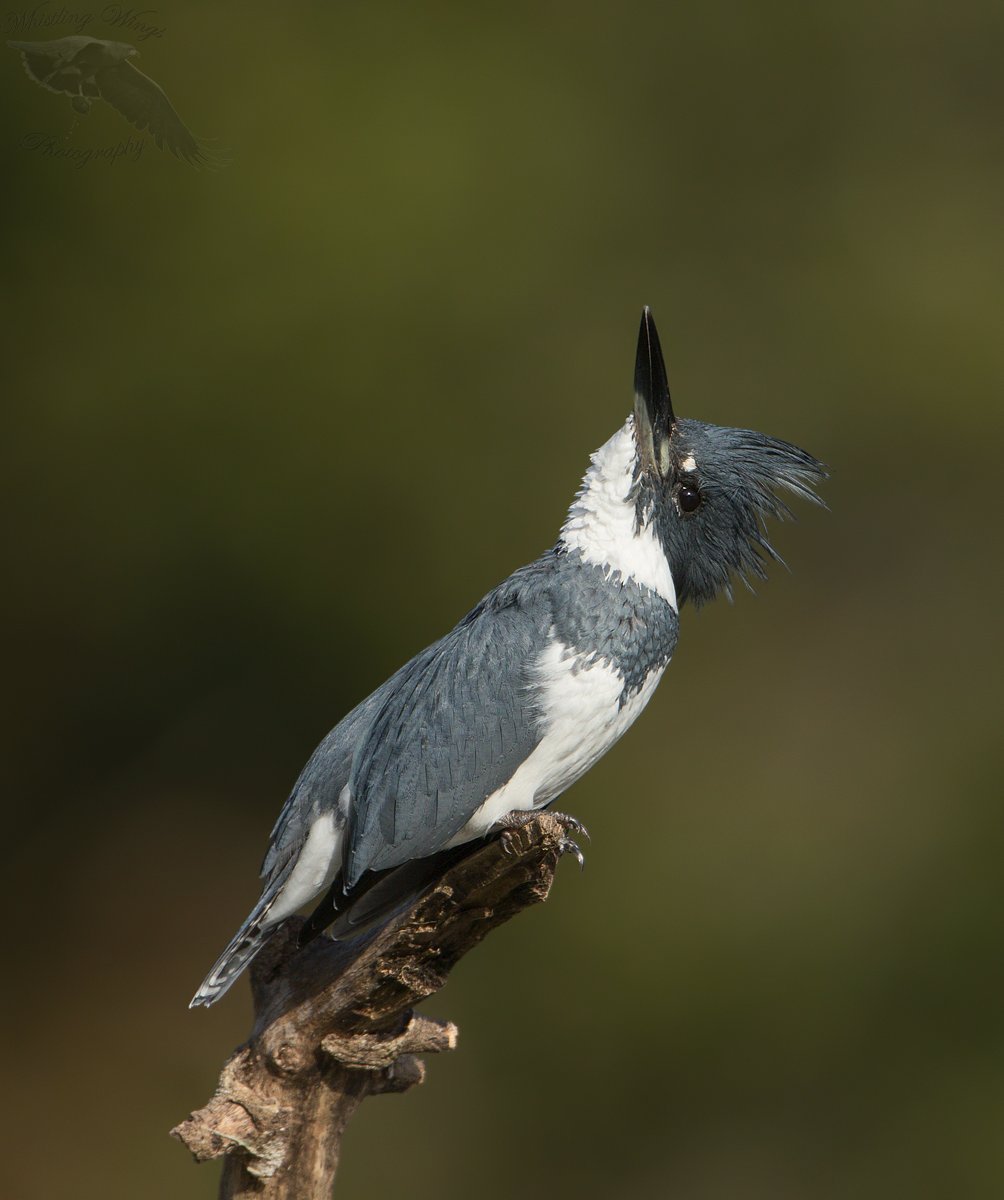 However, even when resting he was always vigilent to what was flying around and over him.  Here he was watching several black vultures fly low overhead. 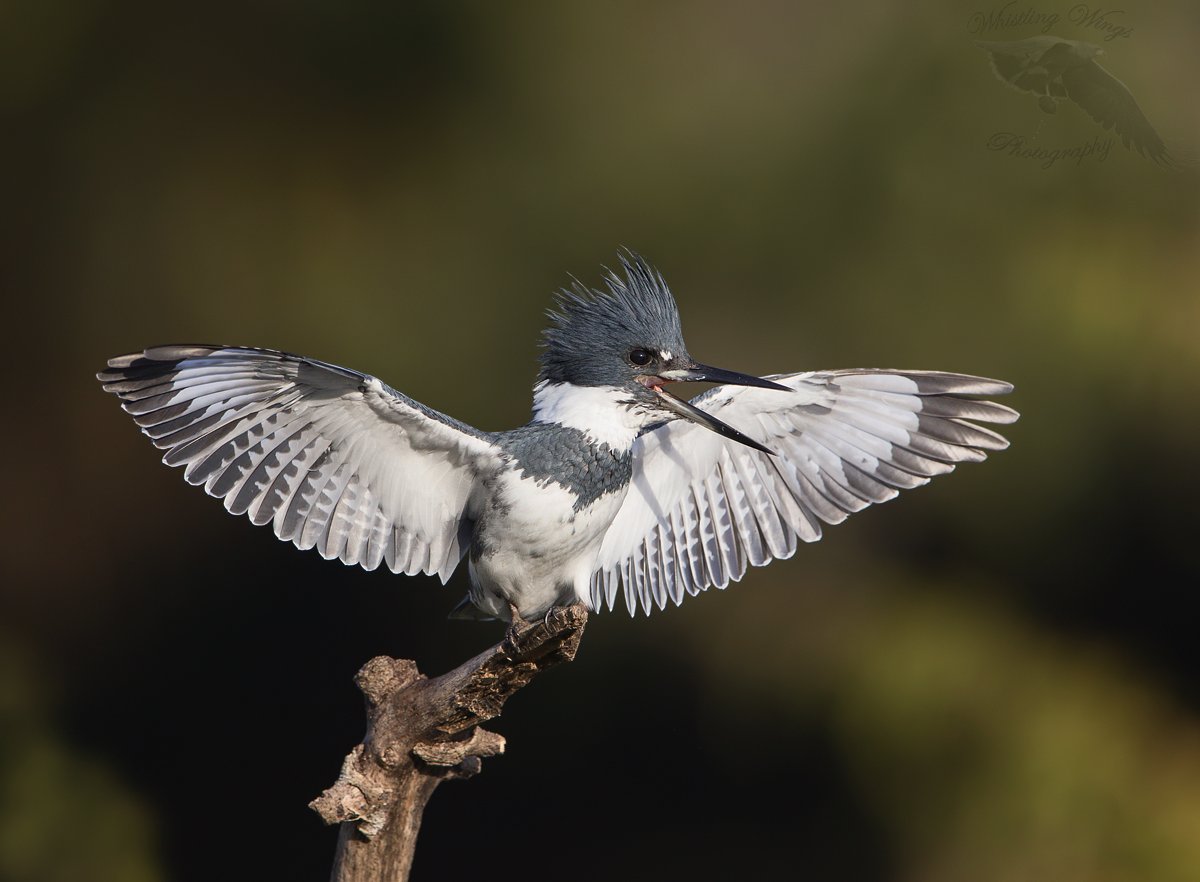 Quite often another bird would want to use his favorite perch.  Little blue herons and snowy egrets were the most common offenders.  He was never happy about the intrusion and would let the intruder know he was not willing to give up his perch without a fuss. 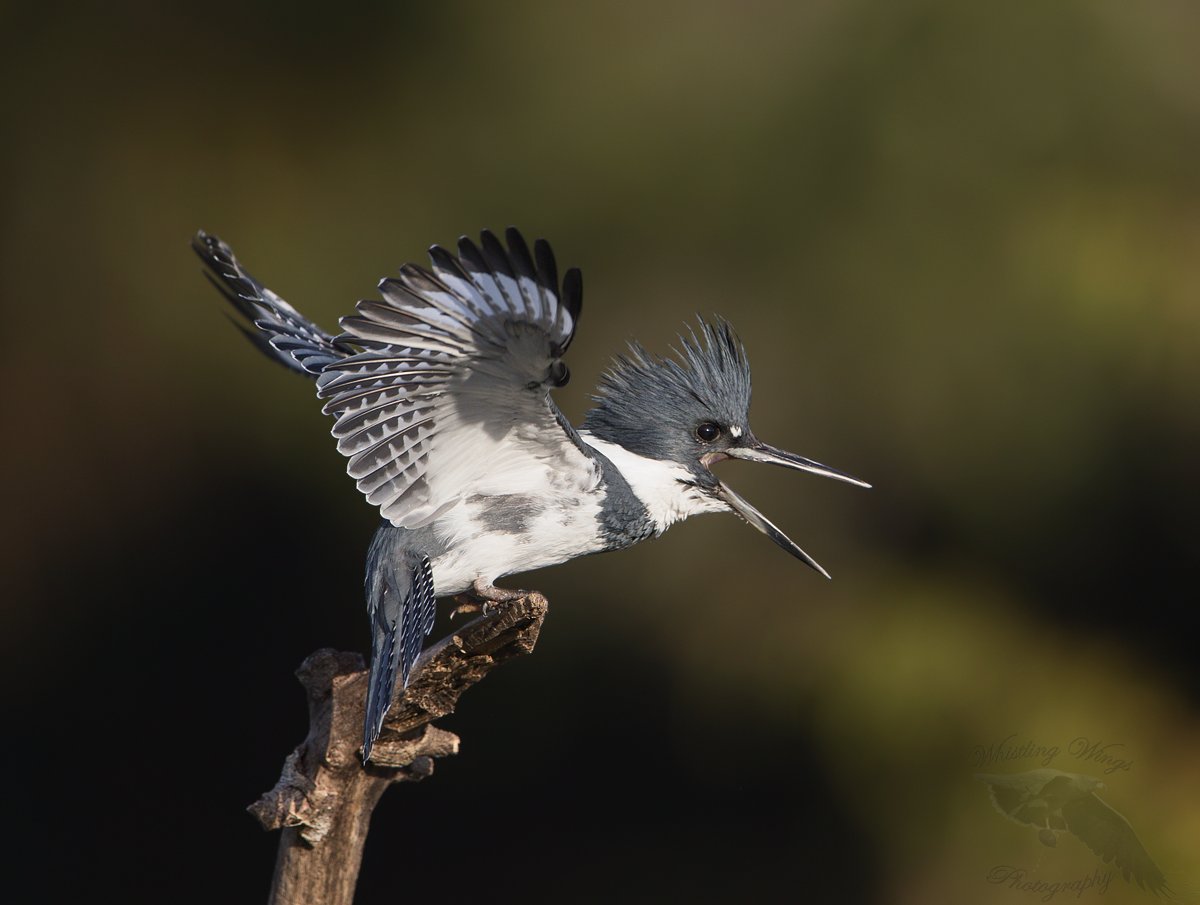 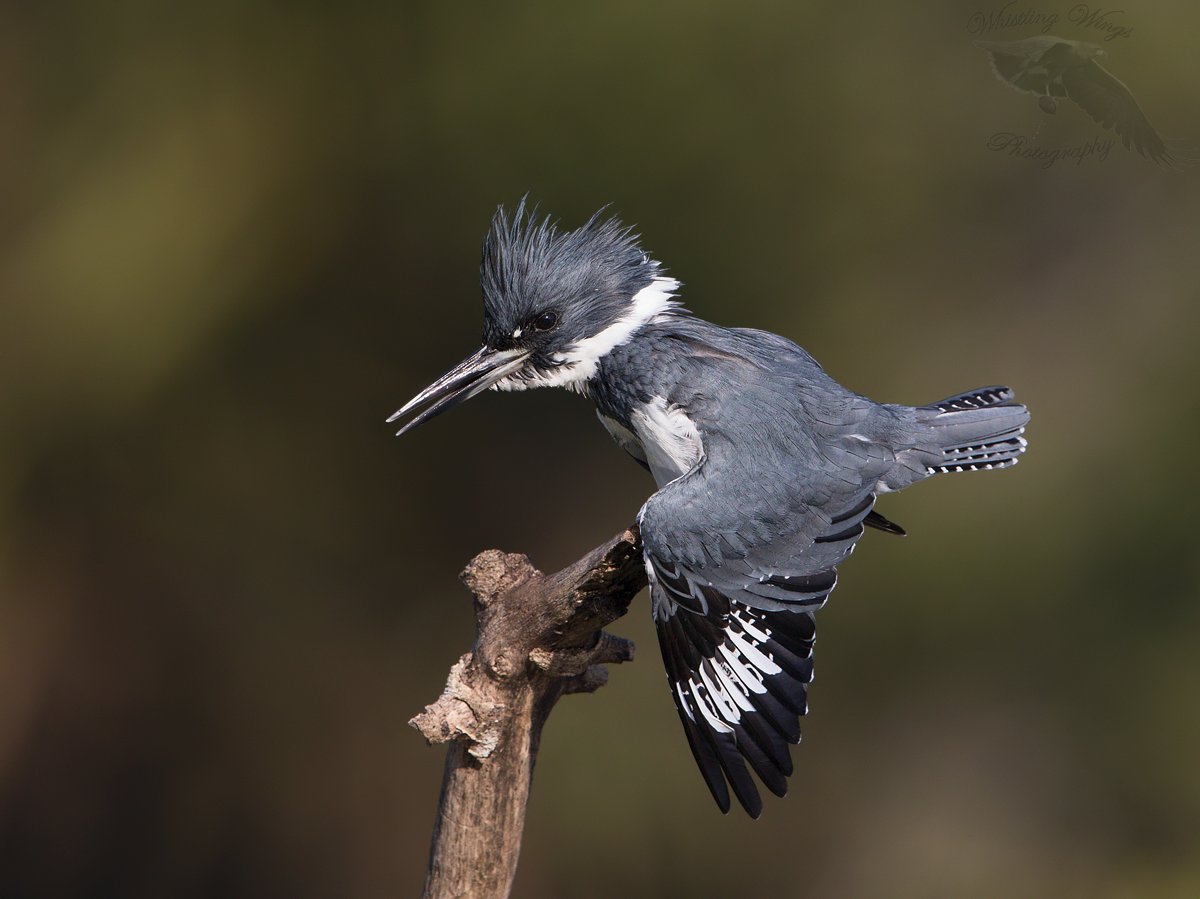 The End and time to take a bow!

It sure has been fun and a great honor to be able to spend some time with such a wonderful bird.  I really do cherish the times when I can observe even a small part of a bird's life.  We can learn a lot from our feathered friends and if nothing else they show me, remind me, how living in the wild world works.  It is not an easy life.  There are always threats. 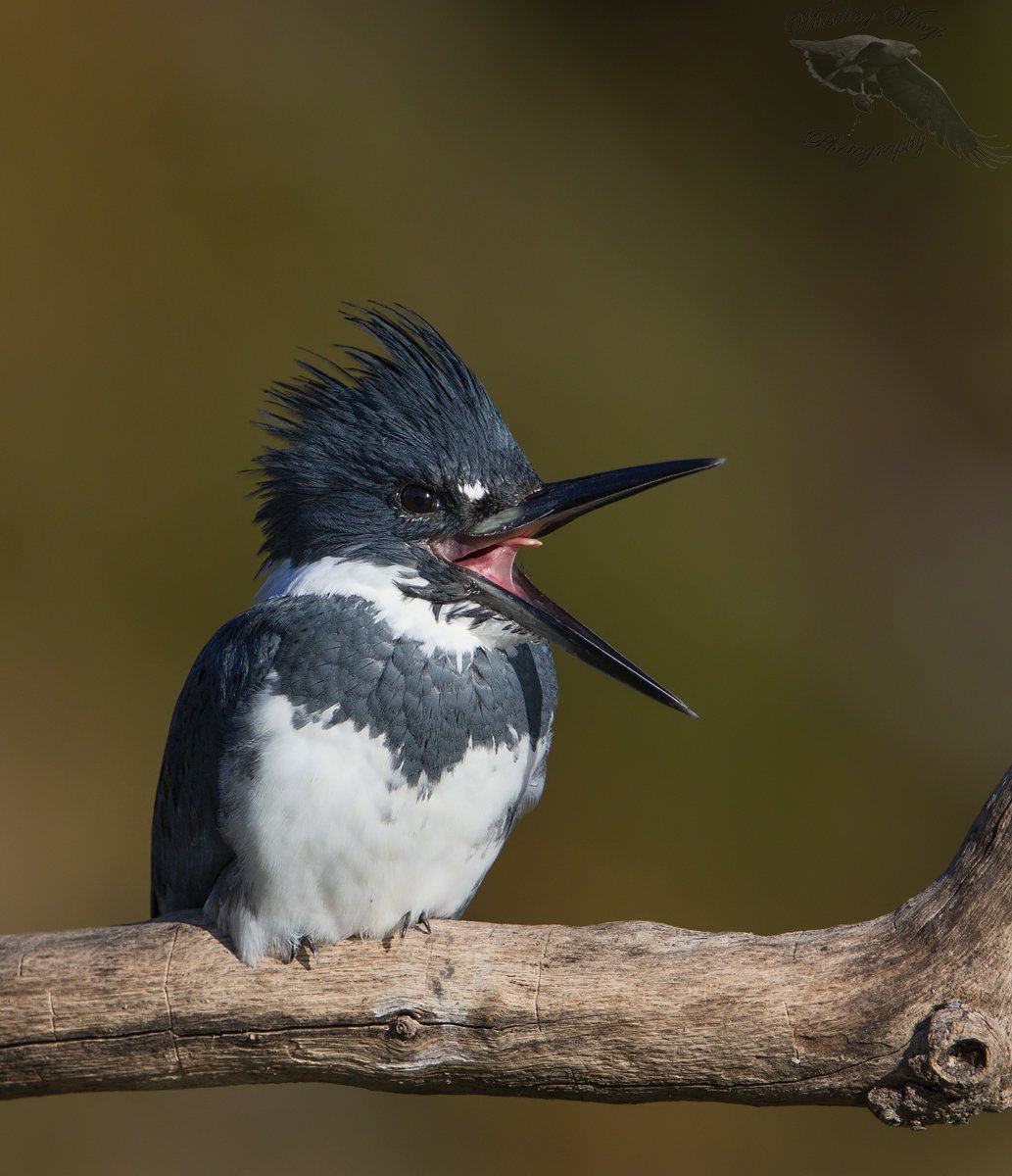 Oh, and just in case you were wondering; yes, kingfishers do yawn first thing in the morning like many of us.

Cheers until next time.

Ron Bielefeld - Thanks so much, Skip. They are so much fun to watch and learn about how birds make a living in the wild world. Ron

Skip - I grew up in Lake Wales, and saw your post on Facebook and followed your link to your page, what a great entry about this bird! I had the opportunity to watch a kingfisher in Dallas and they are a joy to watch. Beautiful pictures!!!!!!!

Lesley Mattuchio - My favorite bird of all time, they are so cool I call them the "Fonz"of birds. Your images are to-die-for . I was fortunate to get images of one on Cape Cod in a permanent blind this summer and now I am hooked. I even have shots of one coughing up a pellet and playing with it. Are you using a structured blind or the camo cloth blind you drape over yourself? Thanks for sharing your images.

Ron Bielefeld - I use a structured blind, not the type you drape over yourself. However, they are portable so I can move them around. Thanks for your compliments on my photography.

gisele - Awesome series ....thank you for sharing and all the work that went into capturing his daily routine.

Ron Bielefeld - Sure, I would love to come and talk to the CC of B. I have spoken to the group in the past.

Lee Stein - Ron, this is wonderful series. I have spent many days at Viera Wetllands trying to capture photos of belted kingfishers. I am a snowbird now back in Jamestown NY home of Roger Tory Peterson and the Roger Tory Peterson Institute. The current exhibit is William Burt's Water Babies. I am a member of Camera Club Of Brevard which meets in Melbourne, the first Tuesday of the month. Would you be interested in presenting and speaking at a meeting?
Best regards,
Lee

Carl Bilancione - Hi Ron,
You may not know I had a serious injury which caused me to sell my practice. With that being said I'm back doing photography. Are you still doing the Kingfisher morning with two?
hope all is well-thanks Carl

Dorothy cunningham - Great blog and images! Thank you for close up views of the Kingfisher!
I have a hard time shoot them myself S9 II'm impressed with your captures for sure!

Dick Mott - Interested in seeing pics of the setup you used for this series on the kingfisher. lens, tripod/head. Blind, etc. The kingfisher is one of the must have bird shots I have been frustrated with for years, and yours are superb!

Randy Mann - Wow great shots! I have a goal to get a kingfisher next year your photography is awesome I follow Alan Murphy as well

Brenda Stevens - Smiling so wide right now. This adventure spying this little guy, still warms my heart everytime viewing him! This no doubt was one of the most memorable moments of my wildlife adventures thanks to you! Looking fwd to many more and thank you for sharing your incredible gifts!
https://drchoneydewcrm.wordpress.com/2014/12/12/nature-reveals-the-hidden-things/

Barb Weiss - These are breathtaking photos, Ron! Congratulations on this wonderful collection!!

Barb Weiss - These are breathtaking photos, Ron! Congratulations on this wonderful collection!!

Kathy Hare - I just saw your kingfisher shots for the first time on the CNPA site. That led me to your website and ultimately your blog. Let me just say that you have the most beautiful kingfisher shots I have ever seen. I know personally how hard it is to get a decent shot of them and your work speaks volumes about your skill, knowledge and patience. Now I gotta find me a hide.......

Kathy Hare - I just saw your kingfisher shots for the first time on the CNPA site. That led me to your website and ultimately your blog. Let me just say that you have the most beautiful kingfisher shots I have ever seen. I know personally how hard it is to get a decent shot of them and your work speaks volumes about your skill, knowledge and patience. Now I gotta find me a hide.......

Debbie Stahre - Indeed, the best belted kingfisher shots I have seen! WOW! Congrats on these fine captures and may you accomplish many more!

Juli Wilcox - Spectacular series & detail. I like the way the sequence is presented.

Don Mullaney - I can only reiterate what the others have said. I know, from experience with these beautiful birds, how difficult a series like this is.

Mike Bader - This is the finest series of kingfisher images I have ever seen. Stunning work indeed.

Great stuff as always. Appreciated the story of the bird's behavior. Adds so much. Was this blind in Viera Wetlands?

William - Beautiful sequence Ron and wonderfully told! Very glad we were able to join you that morning with David and Max. I still haven't gotten the chance to go through all the images but I will try to get them done soon and send you the ones of you and David in the blind.
Nice job!

Ron R Bielefeld - Thanks everyone for your comments. They are always appreciated.

Ron Bielefeld - Harry, thank you so much for your comment. It is much appreciated. Kingfishers are awesome birds with great "personalities." Super fun to spend time with.

Harry Selsor - Ron, I have a pair that frequent my dock area, as soon as I step outside they are gone..so hard to capture…this is magnificent work. I am awestruck at your work. Harry